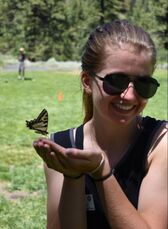 Samantha Dyer, Visitor Services Manager
​Sam has been working with the Galena Creek Visitor Center summer education programs since 2017, but began attending the camp each year since 2013. Working her way up through different teaching positions, Sam has had the joy of spending each summer in the beautiful Galena Creek area. Along the way, she has made many amazing friends and watched several campers grow up into teens and young adults. She hopes to continue the high quality programs at the Galena Creek Visitor Center, while also introducing new ideas and themes to the curriculum.

Sam is currently a graduate student at the University of Nevada, Reno studying Kinesiology with an emphasis in physical education. She has a strong belief in promoting equity in recreation and physical activity, and improving the health of children and families in our community. She hopes to increase opportunities for campers and visitors to immerse themselves in nature and experience the physical, mental and spiritual benefits of the outdoors.​
Contact Sam!

Carly Henry, Visitor Services Coordinator
Carly was raised in Arkansas and developed a love for the outdoors at a young age. Carly attended the University of Oregon where she earned a bachelors degree in Environmental Science. While at UO, Carly began her path in environmental education through the Environmental Leadership Program where she led students on guided field trips through an old growth forest. Carly moved to Reno right after college as an AmeriCorps educator and has been here since. She has enjoyed exploring Reno and the surrounding areas through hiking, mountain biking, and backcountry snowboarding. In her free time Carly also likes to read, knit, and powerlift.

​Carly is thrilled to continue the incredible programs at the Galena Creek Visitor Center as well as implement new and exciting programs to help the community explore and immerse themselves in the Galena Creek Recreation Area.
CONTACT Carly!

Ed DeCarlo puts his 30-year Forest Service career to good use with the Great Basin Naturalists at Galena school field study program. He has a BS in Forest Management Science and a Secondary Teaching Certificate. Ed is passionate about the environment, is an avid skier, hiker, and paddle boarder.  His expertise is in forestry, lands and water, wildlife habitat and winter recreation, and he enjoys living in Carson with his wife.

John Farley is a native of the Midwest.  He spent his career at Lockheed Martin Space Systems in the San Francisco Bay Area, where he worked on many projects including the Hubble Space Telescope.  Upon retiring in 2011, he moved to Washoe Valley.  John enjoys spending time with his daughter, son-in-law, and three grandchildren, hiking with his dog, home remodeling, and winter sports.  John manages the weekly guided hikes, either leading the hikes himself and sharing his extensive knowledge of the local area, or scheduling guest leaders with expertise in local history, animals or plants. 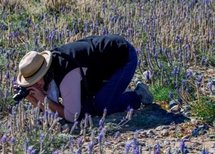 Emma Wynn is a native of the United Kingdom. She lived in Indiana and Japan before moving to Reno with her husband in 2016. Emma has a BSc in Botany and a postgraduate teaching certificate; she has been involved in science and environmental education at a variety of levels and in a variety of roles during her adult life. She is excited to learn about this area and is thrilled to be able to share her passion for nature and the environment via volunteering at the Visitor Center. 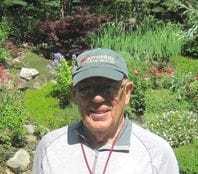 Jack Marsh hails from a small farming town in Southeastern Ohio.  He graduated in 1958 from Rensselaer Polytechnic Institute as an electrical engineer and immediately went on active duty in the Navy. After a few years stationed on the East Coast, he returned to RPI and obtained a Masters and a PhD in physics working in magnetic resonance.  The US Government employed him for roughly nine years primarily as a project manager for R&D.  In 1975 he moved to Silicon Valley and founded a small electronics company specializing in equipment for the oil and gas industry where he served as president until his retirement in 1997.  He and his wife, Becky, moved to Reno in 1999 where both are strong volunteers in our community.